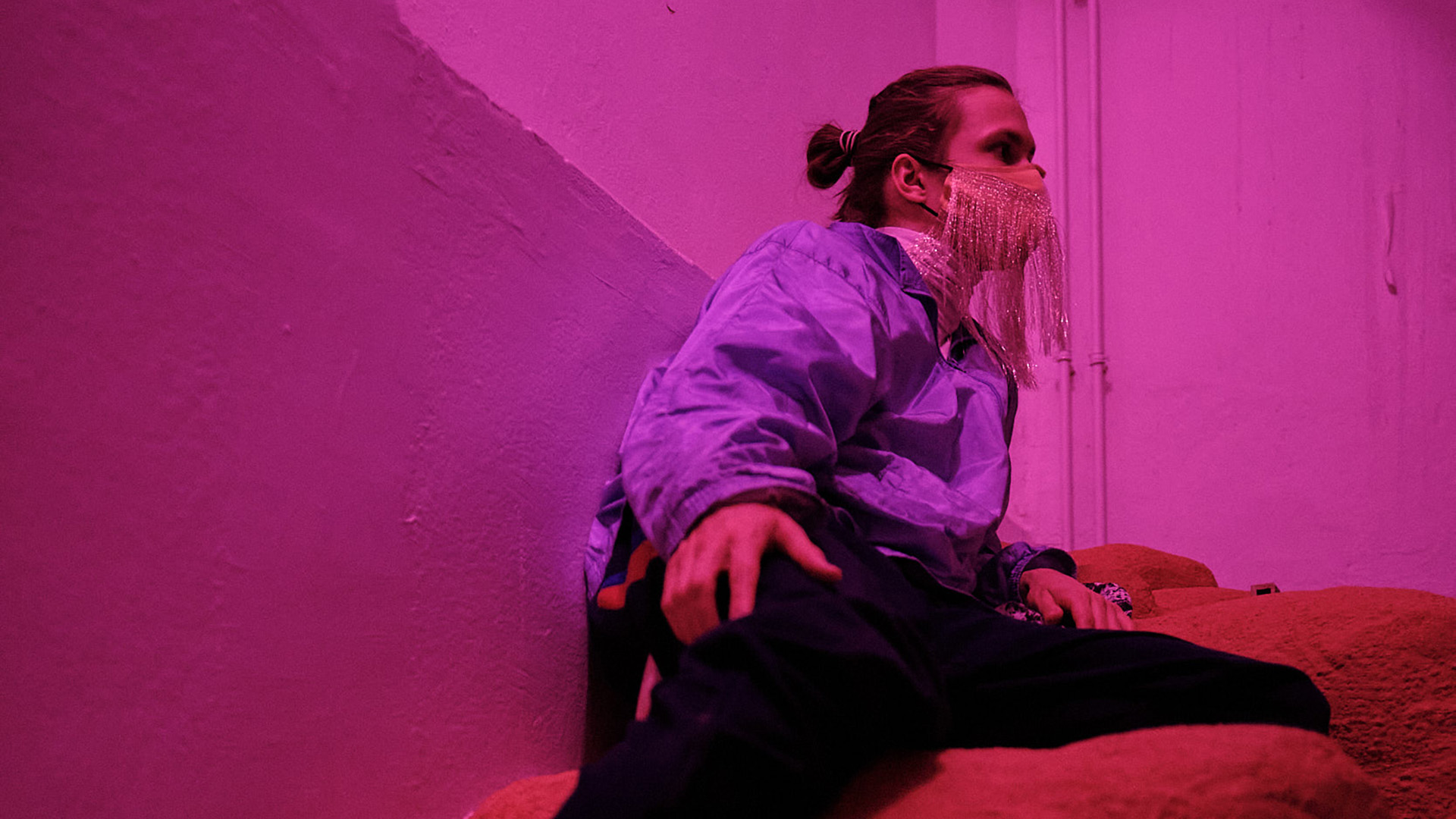 First presented in the Zip-Scene Conference in Budapest, Hungary 1. 10. 2021.

Photo: Marko Mäkinen from ‘lim’. In the photo one audience member with a golden mask.

If we start by briefly looking at the situation where this paper is presented, it looks like a proscenium-arch theatre setting. There’s a presenter in front on a stage with an audience seated in the auditorium. We have consented to this situation partly as we have applied to present in the conference or when we have come to hear this presentation in a conference which doesn’t explicitly say it’s changing this academic form.

However, for the most part our consent hasn’t been asked: it’s implied through academic tradition and convention, and a very Western tradition at that. This context brings with it a set of hierarchies that have been built into this tradition and reproduced in most academic conferences.

If we would change this situation, we would need to ask particular permission for it. I hope I’m not sounding like I’m being rude towards the hosts of this wonderful conference or that I’m trying to be clever. I’m only trying to ground this paper in concrete physical action and theatrical form.

The Norm of Proscenium Arch

The norm of proscenium arch – or stage performance – is a norm like any other norm. It’s a form that dominates our thinking in terms of what a performance or theatre is or can be. This is a norm of theatrical form especially in the so-called West.

This is in a very simplified way the situation where most performances that aim to question this particular convention come in. It’s also a moment of a lot of heated discussion about power dynamics at play in a performance situation. Some say changing this convention liberates audiences, some say it’s a violent act. For myself as an academic and as an artist, I’m interested in the context where this moment occurs and how we can help the audience to navigate through the change that’s been proposed.

I’m proposing a concept from Robin Bauer called ‘critical consent’ as a theoretical tool to help in navigating this change.

I will not try to define consent, but rather use Bauer to point out some of the most common problems encountered when discussing and negotiating consent.

I will then apply this discussion into artistic choices made in one immersive performance I directed and performed in in Helsinki, Finland in March 2021. I will also try to concretely demonstrate how we used a simple tutorial to translate these thoughts into concrete action in order to give audience tools with which to co-create their own choices inside the performance.

I will then also ask for three volunteers to help me a bit – which is something I’d never do in a performance so let’s see how that goes.

Working Against the Norm

Bauer is criticizing the liberal notion of consent where it’s often assumed that there is a neutral space where we can negotiate before entering a situation fraught with power dynamics. What they are proposing as the alternative is the concept of critical consent. It proposes that instead of assuming neutrality as a starting point, we should find tools to ‘invent new power-sensitive ways of dealing with difference and social hierarchy’ (252).

This goes hand in hand with a much-used formulation of safer spaces in queer events and communities that is based on the understanding that it’s not possible to guarantee safe spaces to those who are vulnerable as we’re living in societies which actively discriminate these communities.

Like I mentioned in the beginning, as a maker of immersive performances I feel I constantly have to work against the normative assumptions of what a performance is. The cultural history of performances is always the backdrop. This often looks like a neutral starting point, but is of course filled with power dynamics. Theatre spaces are built for certain kind of performances. The agency is divided in a particular way for those on the stage and those in the audience. These are just the most obvious examples.

When this starting point is questioned in immersive performances, it’s a change that needs to be negotiated with care so everyone feels as safe as possible. For me it’s a question of negotiating power dynamics that should be negotiated in any situation. As makers of immersive performances we should aim to create room for difference and be aware of norms that reduce space for it. And yet, there is no final and ready formula: the discussion around consent evolves constantly and the forms of negotiating consent need to reflect this constant evolution.

I will soon show how we aimed to give some simple tools for the audience to navigate their way through a performance called ‘lim’ that was performed in Helsinki during our second lockdown in March 2021.

The tutorial aimed to address a few common problems when dealing with particular norms in theatre. One of these is that people arrive to a performance with a notion of a proscenium-arch setting – even though it has been announced that this is an immersive performance.

This might come with assumptions of audience being outside the action, observing from a distance, not touching the set or not being in direct social contact with unfamiliar audience members or performers. As the performance was done during a lockdown, social distancing was also one circumstance that needed to be taken into consideration. (Even though we gave audience agency in relation to the distance they wanted to keep, careful safety precautions were taken in the performance in other ways in relation to COVID-19 compulsory masks being one.)

These common challenges led us to discuss in the working group what could be the three things we could teach the audience in the beginning so it would give them clear physical tools by which to navigate the space, objects and other people.

I’m sorry but I’m now going to do the thing I would never do in a performance and ask for three volunteers. I would never usually do this, because it puts you a bit on the spot. I’m doing it now to give you a chance to get to the concrete physical action and for others to observe the actual tutorial.

The volunteers are only asked to walk, pick an object and greet somebody. And you really can’t fail this one.

Before we begin I will tell you that the audience always had three player types which were marked with color – each had their own color. The colors were pink, black and gold which corresponded with the colors of their masks.

Give each volunteer their player type.

I will now teach you how to function on the new planet. You can use some of these skills already while traveling there.

You can move in any direction.

You can touch and manipulate any object.

Please try. Please touch the object that has the same color as your mask.

You can communicate with others either physically, for example:

Or verbally, for example ’Hi’

You can also communicate about the distance you want to keep.

If someone approaches you and you want to keep your distance, you can do it like this:

Could I show this with you? Could you approach me from a distance?

If, however, you feel safe enough with the mask, and would like to come closer to another creature, you can ask it like this:

If you want to come closer, you can ask it by showing

If it’s okay for the other one (shows) that you’d come closer, they can let you know by showing the same gesture:

Could I again show this with you? Could you approach me and show the gesture?

(Thank the one you showed with) Thank you.

Remember that you always need to get an answer before you can come closer. And you can always show (show blocking hand) at any time which means the other one should keep their distance.

Do you have any questions?

Thank you so much.

The tutorial is structured this way because it’s trying to circumnavigate a few common obstacles:

In immersive performances audiences often don’t know if they can move around.

They don’t know if they can touch objects in the space.

They don’t know how to relate to other people in the space.
During COVID-19 they also have to navigate the distance between people.

The tool for distance can also be used in relation to intimacy. It’s a simple way how you can refuse intimacy in a clear, but playful way that has been established together in the very beginning of the performance.

In the tutorial I was trying to give the audience simple and clear physical tools that they can use. At the same time I was trying to keep the playing field as open as possible. I didn’t want clarity by limiting the scope of their choices if that was avoidable.

There are also other things I was deliberately avoiding: I tried to steer clear of creating hierarchies as much as possible. I aimed to address important questions of intimacy, but hoped to keep it playful. This is of course just the tutorial. There were also other rules in place in the performance.

Why is it important to discuss consent in relation to immersive storytelling? As we as makers of immersive performances often discuss the agency and choices of the audience, consent goes into the heart of those discussions.

If makers are taking seriously the agency of the audience – as well as our own – we need to negotiate in order to co-create. Critical consent is a valuable tool in understanding the power structures at play in processes of negotiation. It can help us if we’re willing to go beyond reproducing norms both in the audience relationship of a performance and in social hierarchy.

Likewise, there is the responsibility to bring someone safely back into everyday reality [laughs]. Because you’ve taken them out of ordinary reality and into another place, and then you need to land them back on their feet. And then may be check a couple of times, saying ‘How’s your reality going?’ in sort of closure thing. (94)

PrevNI’JA WHITSON: UNDER THE WATER AND IN THE DARK
Facebook-f Vimeo Youtube
2022 © CENTER FOR EVERYTHING